In 1979, Rotary International became involved with Polio when it committed to providing OPV to six million children in the Philippines as part of its new Health, Hunger and Humanity (3-H) program.  Spurred by the success of this program, Rotary worked with Dr. Sabin on a plan to immunize all children of the world against Polio. This gave rise to Rotary’s Polio Plus programme in 1985.
Today, 99% of the world is Polio Free.
.

100% of the funds raised have been forwarded to Rotary International for the Eradication of Polio.

We are so close to ending polio. 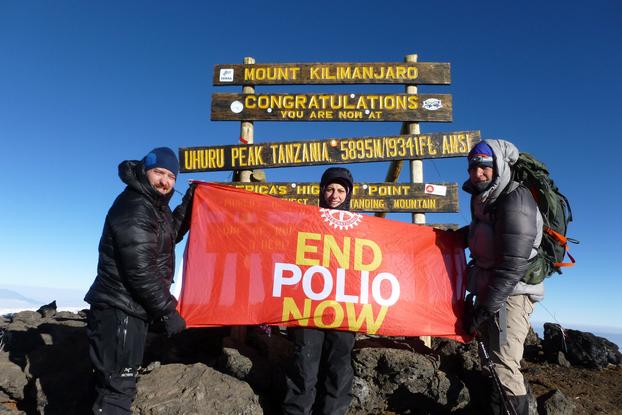 Scarborough North Dental Group is proud to sponsor our Team's 2016 Kilimanjaro Polio Climb will pay for all costs associated with the climb and fundraising efforts.  We will also donate $10,000 to Rotary International to eradicate Polio.

Our goal is to raise $100,000.  Every dollar donated through this website will be forwarded to Rotary International to support the Polio Eradication effort.

It took us 10 seconds to say “yes” says Jennifer Boyd referring to her Team and their decision of climbing Mount Kilimanjaro to raise funds for Polio eradication. In 1985 Rotary International made a promise to the children of the world to eradicate Polio!
We are so close to eradicating this horrible disease from the world and what better way to kick it into full gear than to climb Mount Kilimanjaro.

Poliomyelitis (polio) is a paralyzing and potentially fatal disease that still threatens children in some parts of the world. The poliovirus invades the nervous system and can cause total paralysis in a matter of hours. It can strike at any age but mainly affects children under five. Polio is incurable, but completely vaccine-preventable.

Together we will conquer polio.

Leave a legacy of a